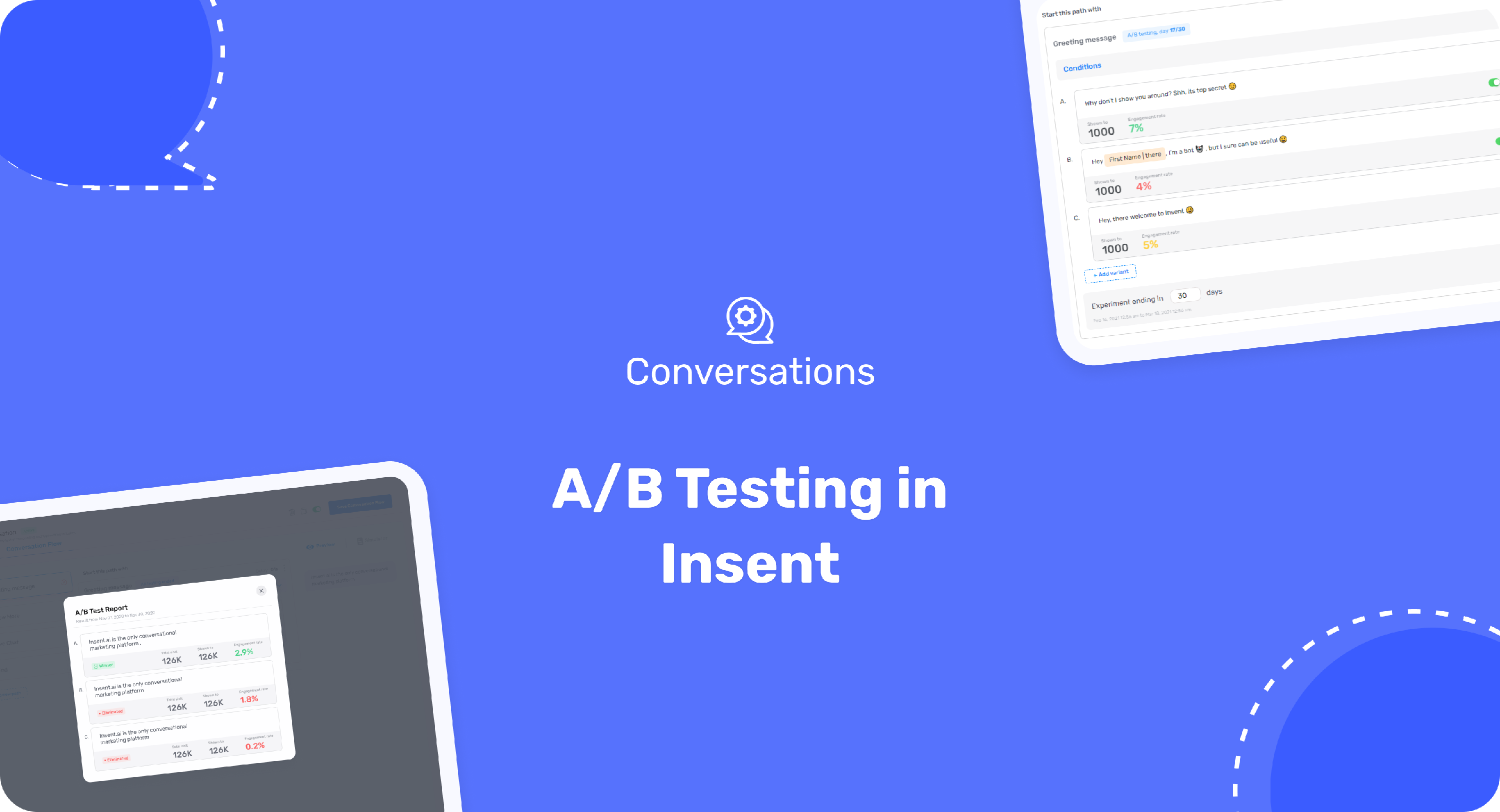 Pre-requisites: To run a greeting message A/B test, you will need ‘Write’ access to the Conversations resource set.

The greeting message is your first touchpoint with your prospects, and making a good first impression greatly improves your odds at engaging and converting a visitor. Greeting message A/B Testing allows you to algorithmically test and prune your greeting messages across your audience or to specific segments over a test interval.

What is A/B Testing?

A/B testing is a method used to compare two options against each other to determine which one performs better. Often two or more options are evaluated as a part of the A/B testing exercise. The different options are called ‘variants’, and variants are shared across an audience at random, and statistical analysis dictates which variant performs the best.

Locate the conversation where you would like to set up a greeting message A/B test.

Click the Add A/B testing variant. You can add up to four variants in an A/B test experiment. Next, choose the duration of your A/B test. Your A/B test should be at least a day long. 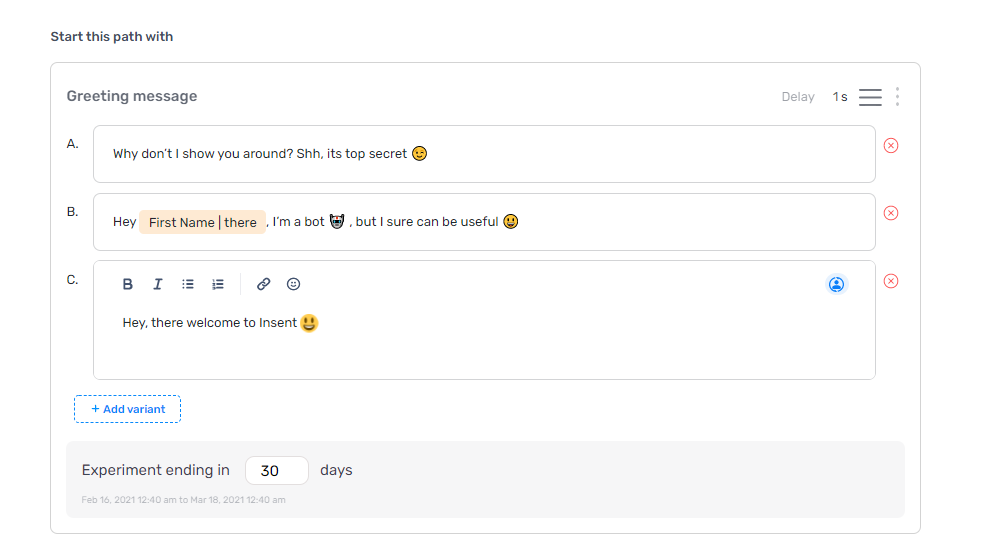 You will be unable to save a conversation if you have variants with the same content. Checks exist to ensure all the variants are different.

You cannot run an A/B test with Duplicate A/B variants. 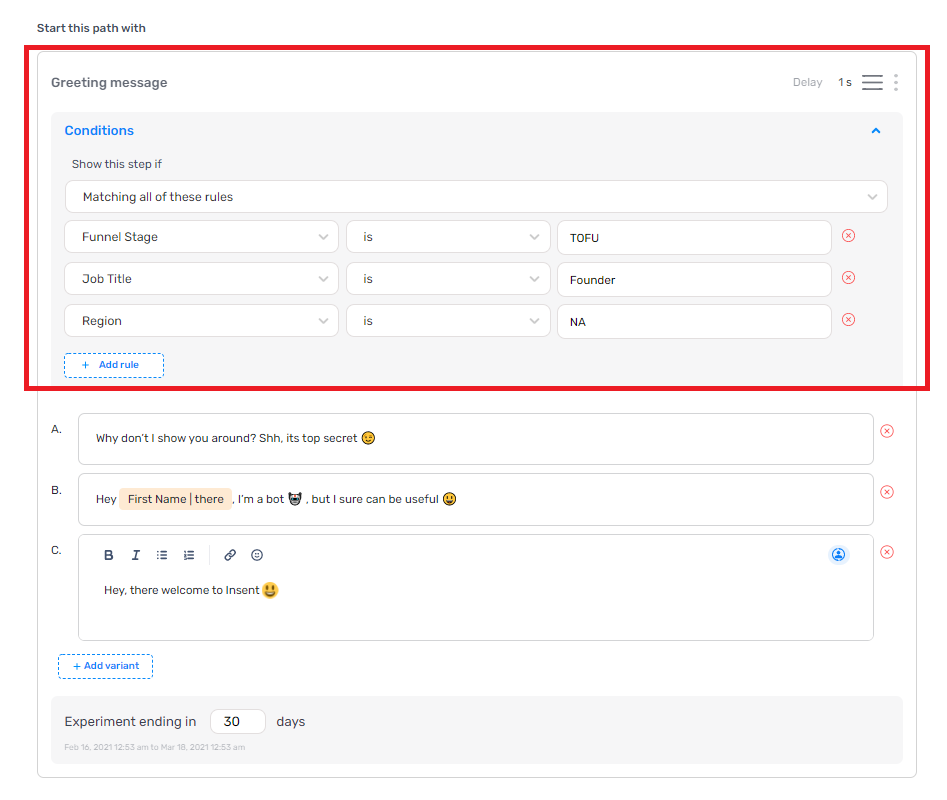 Setup conditions that dictate when the greeting message is shown

Once you decide you are ready to start an A/B test, save and start a conversation. The A/B test will show the date range and the number of days elapsed in the test duration. 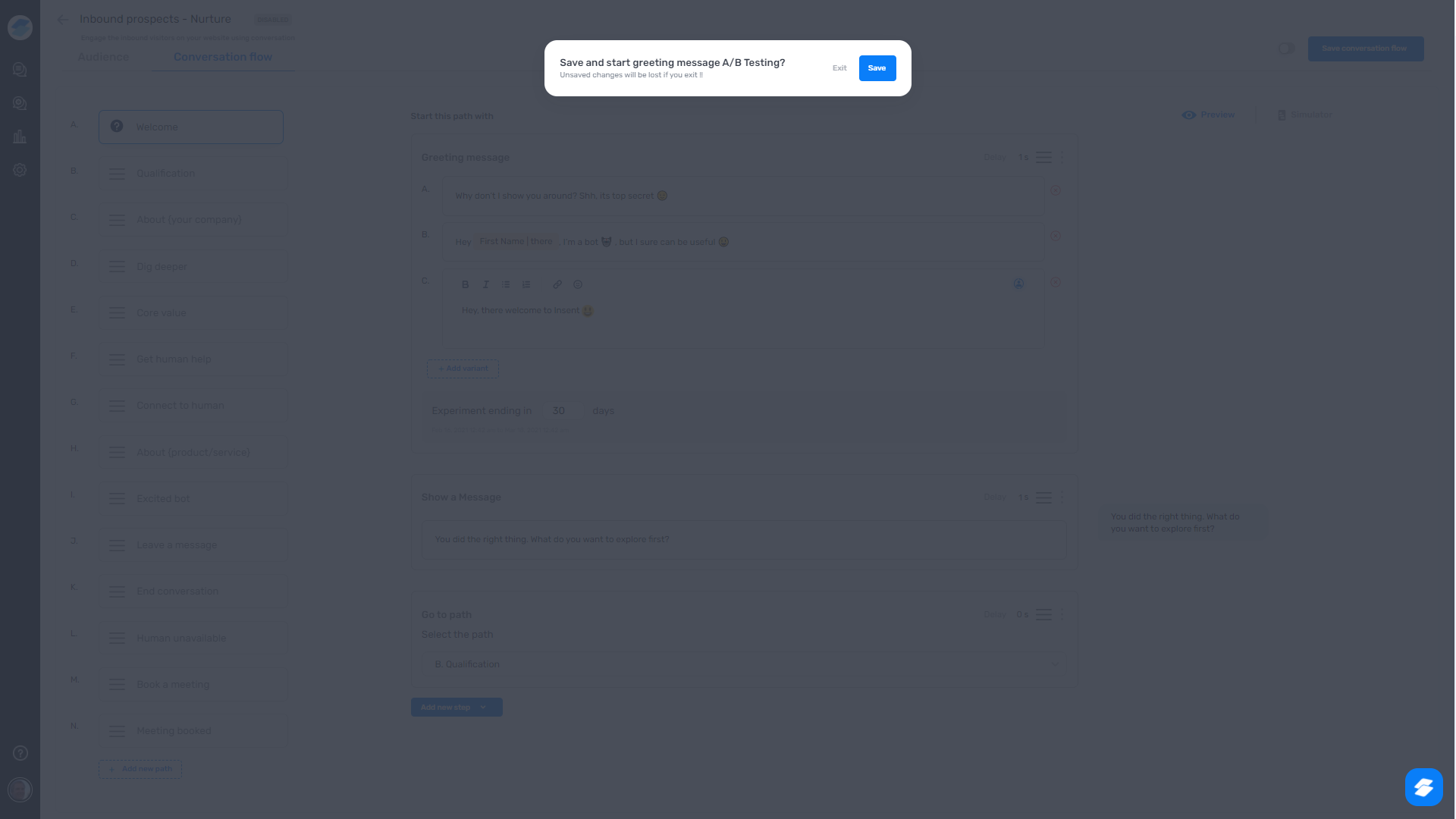 Save and start an experiment.

An active A/B test is shown below. It will detail information such as the total number of visits, number of views, and engagement rate. 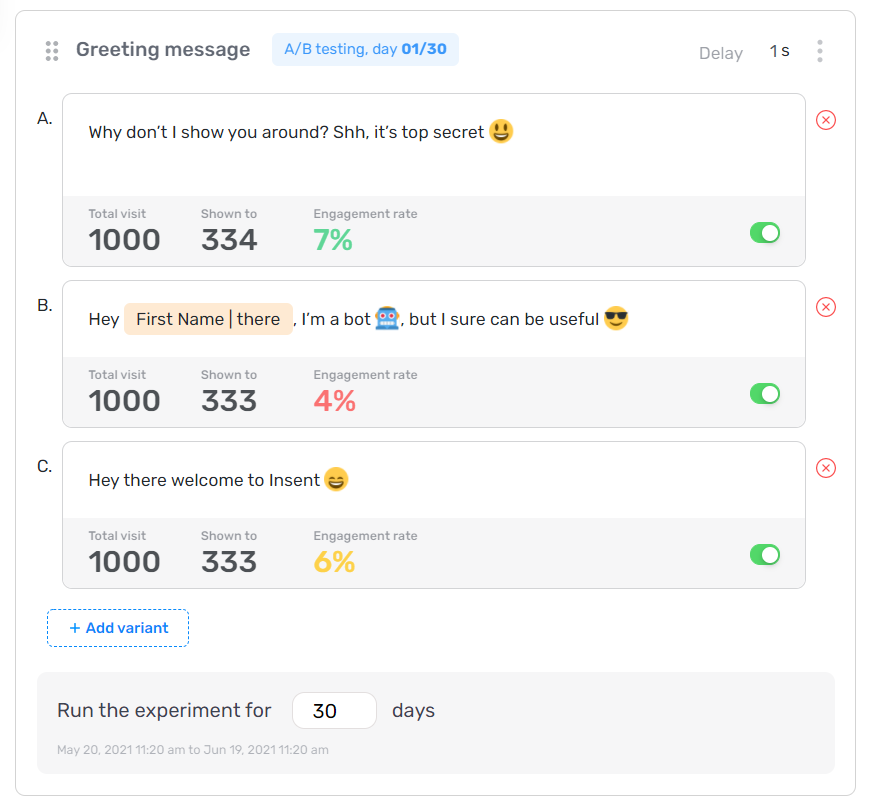 An active A/B test with 3 variants

When an A/B test is in progress

You can turn off variants during the execution of an A/B test and continue the test without restarting it. But if you edit a variant or attempt to enable a disabled variant, a warning message is shown.

If any variant is updated or the greeting message step is edited and saved, the A/B test is reset. You can extend or shorten an A/B test, but this will reset the A/B test. 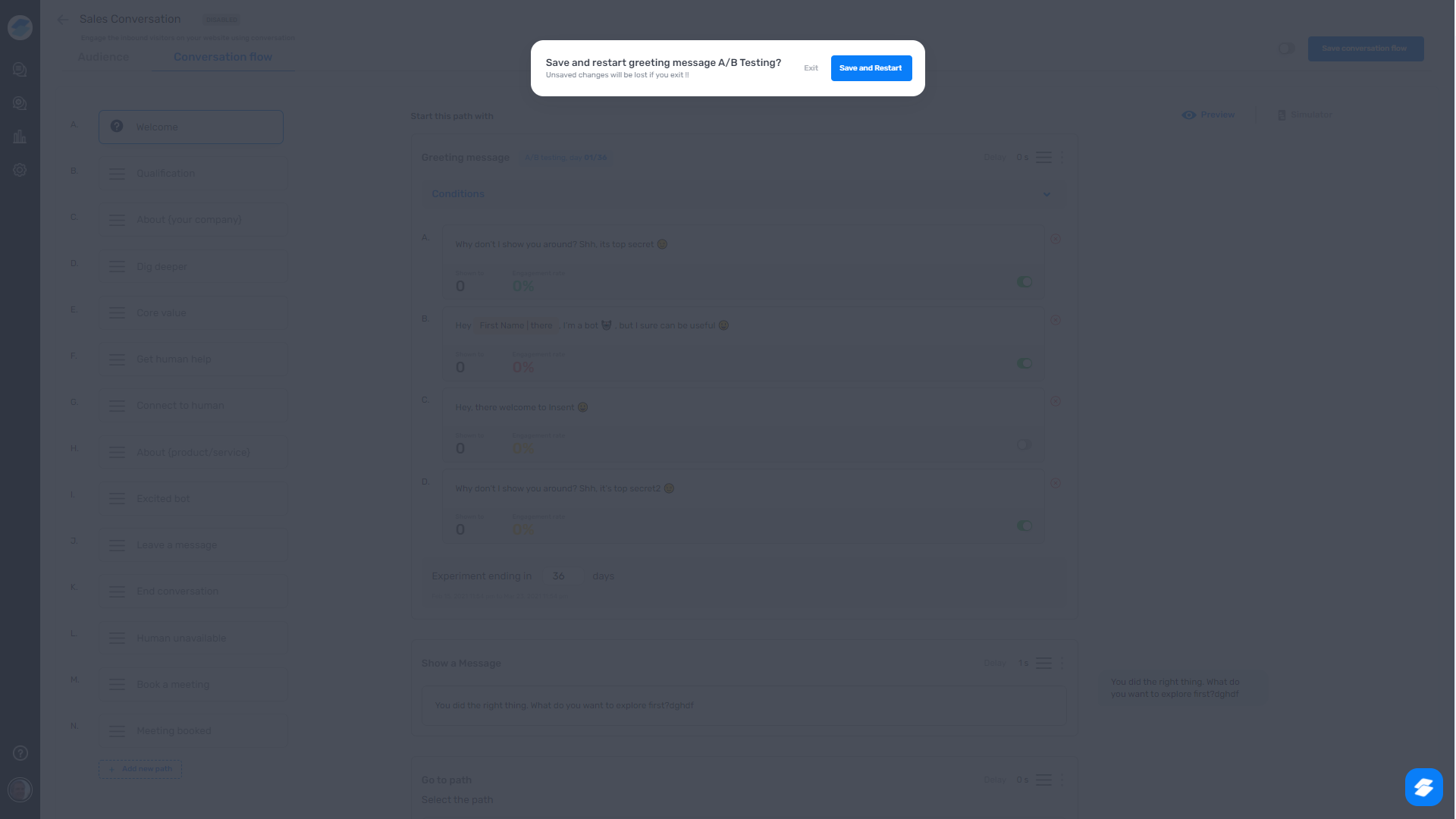 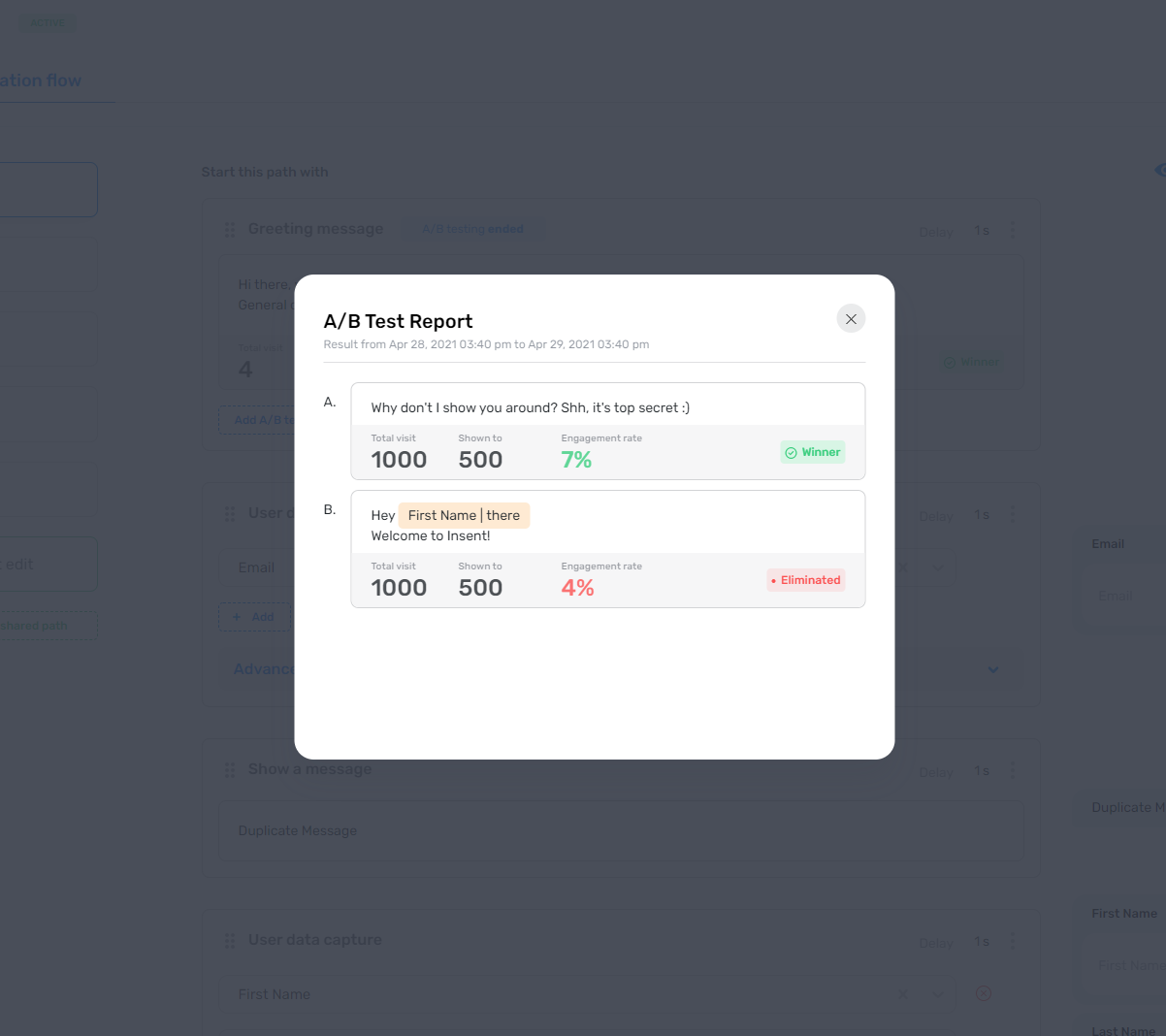 How is a successful variant identified at the end of an A/B Test?

Rules are evaluated to identify the winner of an A/B test and to resolve ties between two variants as:

If the variants in the A/B test have an equal engagement rate at the end of the test, then the rule in the second priority level is executed, if this also results in a tie, then the third priority rule is executed.

At the end of the experiment, if the engagement rate is zero, the test will be declared inconclusive. The first variant in the greeting message order will be the default variant selected at the end of the A/B test.

Did this answer your question? Thanks for the feedback There was a problem submitting your feedback. Please try again later.